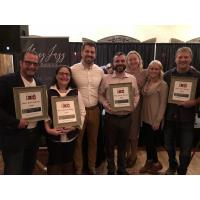 On Wednesday, October 23, nearly 400 guests sampled spirits and tastes from some of the finest purveyors in the Barrington Area at the Barrington Area Chamber of Commerce (BACC) TasteFest. Winners of the Great Taste Awards were announced at the annual event held at the Onion Pub & Brewery located at 22221 N. Pepper Rd. in Lake Barrington. The event, now in its 16th year, has become one of the most popular gourmet tasting events of the year.

During the event guests were asked to vote on the Great Taste Awards, which were announced at the end of the evening. Winners included: Onion Pub & Brewery for Best Taste; Francesca’s Famiglia for Best Entrée; Shark Bait Co D.B.A. Tiburon Rum for Best Spirit; and Nothing Bundt Cakes in Kildeer for Best Dessert.